When Mica Scott moved into a quiet Chicago suburb, she wasn’t ready for what she found. Her new neighbor is bossy, kinda scary, and defines hotness. Sure, he’s a hunky alpha male, the kind most women secretly long for, but the man oozes danger. And Mica isn’t most women. After a chance encounter brings a new man to her door, Mica struggles to find a path between what she wants, and what she needs.

Mica was raised on a ranch in Northeast Texas. Life was hard, but not impossible…until she met her own personal nightmare one night at a rodeo. She escaped his abuse by putting things behind her, isolating herself by moving to Chicago for college and work.

Davis Mason is the hard-living president of the Rebel Wayfarers, a motorcycle club operating out of Chicago. With just one encounter, he becomes determined to keep Mica safe…whether she wants him to or not. He will use every asset in his control to manage Mica, while holding himself aloof from taking the one thing he really wants…her.

Daniel Rupert is a successful businessman. He owns a trucking company and a hockey team, for which he is the star forward. Meeting Mica and Mason when he helped foil an attempt on her life, he began working jointly with Mason to keep her safe. But unlike Mason, Daniel is not satisfied with a platonic relationship. He insinuates himself into Mica’s life, and he only wants…everything.

Events escalate and Mica’s very life hangs in the balance as old threats resurface and the men in her life scramble to keep her alive. 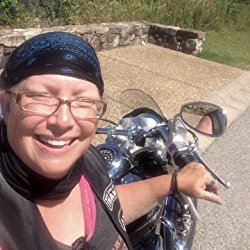 Raised in the south, MariaLisa learned about the magic of books at an early age. Every summer, she would spend hours in the local library, devouring books of every genre. Self-described as a book-a-holic, she says “I’ve always loved to read, but then I discovered writing, and found I adored that, too. For reading…if nothing else is available, I’ve been known to read the back of the cereal box.”

Oatmeal is her comfort food. She hates gardening but loves flowers; not cut arrangements, but in the wild, outside. She has a deep and abiding respect for our military. Her dad was career Air Force and parades make her cry. Walking Dead is about the only TV she watches anymore, don’t bother her on Walking Dead night, when she’s been known to shout, “Go Team Darryl!” Yes, she’s still sad about Firefly.

She’s a hockey fan, like … a serious hockey fan. She’s loyal to the Edmonton Oilers, but asks that we don’t judge her about that. She also likes the Nashville Predators and Ottawa Senators. The local ECHL team, the Fort Wayne Komets, are a fav of hers, and she has season tickets. She’ll also generally try to hit the road games within a hundred-mile radius.

She’s a wanna-be hiker, working on a “bucket list” of hikes like Knobstone (completed in four days mid-April 2014 – whoooo!), sectioning parts of the AT, and now and then looking west towards PCT.

She embraces her inner geek; MariaLisa has been working in the tech field for a couple decades. A sometime PC gamer, she still plays EverQuest after all these years. She says, “What can I say, I’m loyal (see above, I’m an Oilers fan LOL). Yes, I’ve heard of WoW, and have a coupla toons there, too.”

On music, she says, “I love music of nearly any genre — jazz, country, rock, alt rock, metal, classical, bluegrass, rap, hip hop…you name it, I listen to it. I can often be seen dancing through the house in the early mornings. But I really, REALLY love live music. My favorite thing with music is seeing bands in small, dive bars [read: small, intimate venues]. If said bar [venue] has a good selection of premium tequila, then that’s a plus!”