Pregnancy isn’t easy when your baby daddy is a crazy overprotective angel-vampire hybrid and there’s a kidnapper on the loose.

Georgia Pearce is with child, carrying a baby destined to begin the next generation of powerful witches. As if a mysterious prophecy and a new (dysfunctional) family wasn’t enough to deal with, all of Georgia’s hard work to rebuild her coven is ruined when witches start vanishing.

Georgia investigates, only to find that the kidnapper has ties to her lover Zak Goodwin, and is more family than foe. He has big plans to turn the planet into heaven on earth, though his idea of heaven resembles hell more than paradise. The only one standing in his way? Georgia.

As she fights to bring this dark angel down, she dives deeper and deeper into Zak’s forgotten past. The romance between them sparks and ignites, only to explode into a fire no one sees coming. Even Georgia’s powers aren’t enough to stop the evil that seeks to destroy her and her child. Has her magic finally met its match?

The most suspenseful and shocking book in the Awakening series yet, First Blood is a hot and sexy urban fantasy full of action, magic, shifters, and adventure. This paranormal romance by author Jane Hinchey is certain to leave readers breathless. 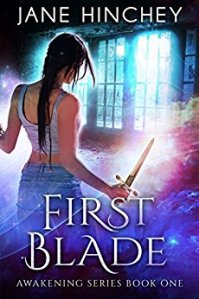 Living in the City of Churches (aka Adelaide, South Australia) with her man, two cats, and turtle, she spends her days writing fantastical stories full of dark sexy vampires, hot shifters, sexy aliens, jaw dropping demons, sinful angels, and magical witches – and while they can be snarky and swear a lot, they mean well and you’ll grow to love them. Honestly.

When she’s not in her writing cave she’s usually playing the Sims, Civilizations or something similar, binge watching Netflix or upping the ante in the crazy cat lady stakes. She loves to hear from her readers, so swing on by her website at http://www.janehinchey.com and say hi.