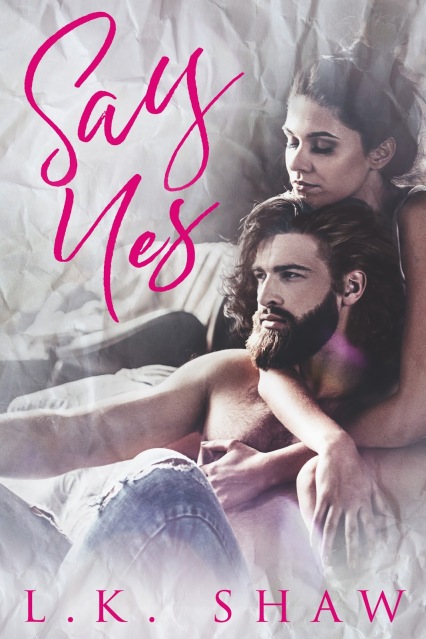 
On March 1, Say Yes will be going into Kindle Unlimited so get your copy today!

Friends make the best lovers. Or so Casey Santiago thinks.

For ten years, she’s lived with the memories of an abusive childhood. Now, she’s ready to make new ones. Who better to help her than her best friend, Philip Maxwell?
When she approaches him with her shocking proposal, he hesitates. Sex complicates things.
Can Casey convince Philip that their friendship is strong enough to withstand anything, including falling in love?

“Will you…will you touch me?” I whispered against his lips, my voice soft and breathy. “I want to feel your hands on me, Philip.”

His grip tightened just slightly on my waist before he relaxed, but there was a new tension in him. I held my breath as I waited for his response to my bold question. I felt in control, something sadly lacking in my life. There was power in being the one who said yes. I was allowing what happened to me. No one was making me do anything I didn’t want to. It was actually almost liberating to make my needs known. I’d never been given this chance before.

“Let’s go sit on the couch, maybe get a little more comfortable.” Philip’s voice was gruff and rumbled through me like a freight train.

As we settled on the sofa, I scooted as close to him as possible, until I was practically in his lap. My breath caught as Philip leaned forward and began plucking the pins from my hair, until he’d tossed them all on the coffee table. I let out a soft sigh as he threaded his rough, calloused fingers through my hair until it cascaded down, billowing around my shoulders and settling over my breasts.

“Your hair is like silk,” Philip said softly as he ran his fingers through my hair again, just stopping before he reached my breasts. “I can imagine it spread…”

He shut off the flow of words. My brain tried to puzzle out what he had meant to say, but when his finger ghosted across my neck, all thoughts flew out of my head. My nipples hardened, and I shuddered at his touch. I watched his eyes track the path his finger was taking as it brushed across my collar bones. I wondered if he could see how much his touch affected me.

“Are you going to touch me now?” my words were anxiously excited, but I couldn’t help it. I was desperate for his touch.

Philip’s lip quirked in a half-smile as his gaze met might. His finger never stopped traversing across the top of my chest, moving neither higher nor lower. “I am touching you.”

My lower lip dropped into a pout. He was being deliberately obtuse. “Not there.”

“Oh,” he said with mock innocence, “this isn’t where you wanted me to touch you?”

My hair danced around my face as I shook my head. “You know it isn’t.”

In response his finger navigated a path across my shoulder and down my arm, leaving a trail of fire in its wake. Now he was just teasing me. “Not there either?”

“Philip.” I hated that his name came out sounding so whiny, but I had no idea that I’d need his touch more than I needed air.

LK Shaw is a physical therapist assistant by day and author/social media addict by night. She resides in South Carolina with her high maintenance beagle mix dog, Miss P, who should probably just have her own Instagram account. An avid reader since childhood, she became hooked on historical romance novels in high school. She now reads, and loves, all romance sub-genres, with erotic romance and romantic suspense being her favorite. LK enjoys traveling and chocolate. Her books feature hot alpha heroes and the strong women they love. LK loves to interact with readers. You can follow her on any of her social media. Don’t forget to sign up for her monthly newsletter! http://eepurl.com/bTSyrP