Private Investigator Charlie Parker returns in this heart-pounding thriller as he seeks revenge against the darkest forces in the world, from the internationally bestselling author of the acclaimed The Woman in the Woods.

He is our best hope.

He is our last hope.

On a lonely moor in northern England, the body of a young woman is discovered. In the south, a girl lies buried beneath a Saxon mound. To the southeast, the ruins of a priory hide a human skull.

Each is a sacrifice, a summons. And something in the darkness has heard the call.

Charlie Parker has also heard it and from the forests of Maine to the deserts of the Mexican border, from the canals of Amsterdam to the streets of London, he will track those who would cast the world into darkness.

With John Connolly’s signature “blend of crime and supernatural horror” (Crime Reads), A Book of Bones is a terrifying and suspenseful thrill ride that will keep you guessing until the very last page.

KEEP READING TO SEE AN EXCERPT!

Desert, scrub, and a city in the sunlight: Phoenix, Arizona.

“Business?” asked the woman sitting next to Parker, as the plane made its final approach. They hadn’t spoken since the flight left Texas, but Parker had registered her curiosity. He’d passed her as he was being escorted to the gate, bypassing security entirely, a federal agent to either side of him, their weapons visible. He was surprised it had taken her so long to strike up a conversation. Her self-discipline was admirable.

She was in her early forties, he estimated, and recently divorced. The pale circle around her ring finger was visible against her southwestern coloration. Her hair was dark, and her eyes were kind, if wary. The separation had probably been painful.

“I was wondering if you’re here on business.”

Parker returned his gaze to the window, but she was persistent.

The correct reply should have been “yes” for a second time, but he didn’t want to appear rude. It would make her feel bad, and he wouldn’t feel much better.

“I hunt,” said Parker. He was surprised to hear the words emerge, as though spoken by another in his stead.

“Oh.” Her disapproval was obvious.

“But not animals,” he added, as the voice decided to make the situation yet more complicated.

He could almost hear the cogs turning.

The wheels came down, and the plane hit the ground with a jolt that caused someone at the back to yelp in the manner of a wounded dog.

“Oh,” she said, for the third time. “I guess I shouldn’t have asked, but I saw the people with you at the airport, and…”

She trailed off. She was holding a magazine in her hands, which she now opened and pretended to read as they taxied to the terminal. Parker had set aside his own book, a copy of Montaigne’s Essays gifted to him by Louis. It was the first time Louis had ever passed on a book to him. Lately, Louis had become quite the bibliophile. They both had, because in recent months they’d been learning a lot about old volumes.

Parker wasn’t entirely clear why Essays should have particularly engaged Louis, although he had to concede that Montaigne wasn’t short of opinions on just about every subject under the sun, from thumbs to cannibals. Initially Parker had persisted with the book because of its giver, but now Montaigne was getting under his skin. Montaigne knew a lot, yet his essays weren’t about displaying what he knew so much as working toward some understanding of all he didn’t know, which made him an unusual individual by any reckoning. Since the flight had been delayed by almost an hour, he’d had plenty of time to spend in Montaigne’s company.

The plane came to a halt, but Parker didn’t rush to get up. He was seated in the second row, was traveling only with cabin bags, and knew that more federal agents would be waiting for him at the gate. He would be in a car and on his way from the airport before most of his fellow travelers had even claimed their baggage.

The door opened, and the first passengers began to disembark. The woman who had been sitting beside him was now wrestling an overfilled case from the compartment. He helped her to free it, and she thanked him.

He followed her from the plane, and she fell into step beside him.

“Look,” she said, “if you’re in town for a few days, maybe you might like to meet for a drink. I’ll buy, as an apology, and I promise I won’t ask any more questions about what you do for a living. At least, I’ll try not to.”

“That’s very generous of you,” said Parker, “but I won’t be staying long.”

They reached the gate. As predicted, two more federal agents were hovering by the desk. Parker saw them react as he appeared, and the woman picked up on it.

She handed him a business card. Her name was Tonya Nichols, and she was the vice-president of a bank in Tempe.

“In case your schedule changes,” she said. “Good luck with your hunting.”

PARKER HAD NEVER COME to terms with Arizona. He did not have the desert gene, and Phoenix Sky Harbor was one of his least favorite airports, even by the low standards of Brutalist architecture. Back in the late 1990s, the then mayor of Phoenix, Skip Rimsza, had proposed renaming the entire airport after Barry Goldwater. The proposal didn’t have enough support to go through, but Terminal 4, at which Parker had arrived, was still named in honor of the former Republican senator and UFO nut who’d had his ass handed to him by Lyndon Johnson in the 1964 presidential election. But Parker’s grandfather, a staunch northeastern Democrat, had always retained a degree of affection for Goldwater, mostly because the latter had once advised all good Christians to line up and kick the televangelist Jerry Falwell in the seat of his pants.

The two agents marching alongside Parker didn’t look old enough to remember Goldwater’s funeral, which had taken place only in 1998, and were probably still being carded in bars. Parker wondered if the FBI was now recruiting straight out of high school. The agents, who introduced themselves as Skal and Crist, were very polite, and one of them insisted on carrying Parker’s case, leaving him to manage only his leather messenger bag unaided. Their solicitude made Parker feel old, and their height caused him to resemble an adopted mascot. Skal was north of six feet tall, and built entirely from blocks. Crist made him appear dainty by comparison.

“Where does the name Skal come from?” Parker asked.

“Isn’t it some kind of toast?”

“Yes, sir. I believe the derivation is from a cup or bowl.”

Parker wasn’t used to being addressed so politely by federal agents. It made him nervous.

Skal looked at Crist, who shrugged helplessly, as though to suggest that the ways of men remained mysterious to him, but he’d back his colleague to the hilt if the decision to drop the “sir” came back to bite him somewhere down the line.

By now they were at the terminal door. A heavy-duty Chevy Suburban was parked in the area reserved for law enforcement personnel, a Phoenix PD cruiser idling nearby just in case anyone became alarmed.

“I take it Ross is already here.”

“SAC Ross is at the scene,” Crist corrected. His voice might have come from the bowels of the earth, so deep was the rumble.

“Did he say anything before he sent you to pick me up?”

It was Skal who answered the question.

“Sir”—and the word held an additional unspoken apology for its return—“he told us not to let you shoot anyone.”

“He was pretty clear on that,” Crist added.

Neither of the agents offered even the hint of a smile. If anything, they bore the slightly fretful demeanor of two straight-A students who had somehow fallen in with a bad element, and were certain it was going to impact on their report cards come the end of semester.

“Well, I wouldn’t want to get you into any trouble,” said Parker.

“Yes,” said Crist, “thank you very much. We wouldn’t want you to get us into any trouble, either.”

The three men stood awkwardly by the Suburban for a moment.

“If you’re waiting for a hug…” said Parker.

Skal bounded to open the rear door of the Suburban as quickly as he could. Clearly, thought Parker, he wasn’t the hugging kind. 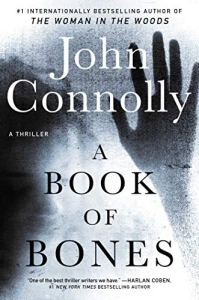